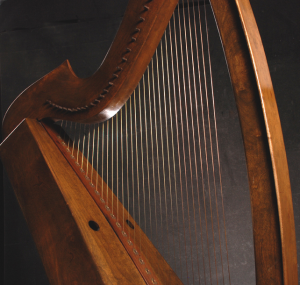 One thousand years ago, Irish musicians played magnificent harps strung with solid brass. They played with their fingernails to bring out that crystalline, yet deeply resonant quality which their poets likened to the pealing of bells. They played for kings and chieftains, they were celebrated in myths and legends and they were lavishly honored. For the sound of their harps was the sound of Ireland.

When Ireland’s bardic order was shattered and replaced by English rule, these harpers had little choice but to take to the roads and seek patronage among wealthy landowners. Of these itinerant musicians, Turlough O’Carolan (1670-1738), the last of the Irish bards, was surely the most beloved and prolific.

When, two hundreds years ago, the last remnants of Gaelic Ireland were disappearing, the harpers, again moving with the times, ceased to play with their fingernails and then abandoned their brass strung harps altogether in favor of the more modern, muted, gut-strung Irish harps. At this point in Irish history the sound of an entire culture was silenced and a musical epoch was ended.

The harp that Patrick plays is a splendid recreation of that legendary Celtic instrument made by the master harp builder Jay Witcher of Houlton, Maine. Like its ancestors, its thirty-two strings are made of solid brass and its body is made of hardwood (maple). It is tuned diatonically and tends to be set in the key of F or G. Like his ancestors, Patrick plays it with his fingernails.

The ancient Celtic harp is generally considered more difficult to play and is unquestionably more temperamental than the more modern neo-Irish harp. Yet Patrick chose it for its rare, exquisite sound, its historical resonance and its fabled capacity to soothe its listeners, to beguile them, and, as it did all through the bardic centuries, to lead them into the realms of the imagination.