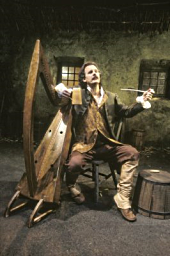 Ireland in the 17th and 18th centuries was a troubled, tumultuous place. The old Gaelic order had been shattered by the English, and the poets, the bards and the harp players were set walking the roads. Yet, this dark period of Irish history produced a Celtic harper and composer of such brilliance, grace and character that he is, to this day, regarded as his country’s greatest and most beloved musician —Turlough O’Carolan.

O’Carolan’s Farewell to Music, conceived and performed by Patrick Ball, and written by Patrick Ball and Peter Glazer, is a one-person musical theater piece which brings to the stage the legendary life,the turbulent times and the captivating music of this most celebrated Irish artist. Interspersed with performances of fourteen of Carolan’s tunes played on the rare wire-strung harp, the play tells the harper’s story through the character of poet and harper, Charles MacCabe, Carolan’s life-long friend and traveling companion. Through MacCabe’s eyes and Carolan’s music, we are drawn into this storm-tossed chapter of Irish history. The play, enriched by Carolan’s beautiful melodies and the crystalline sound of Patrick’s harp, is charged with Irish wit and pathos, and demonstrates both the power of friendship and the vital role of the artist in troubled times.

For a Photo Gallery of O’Carolan’s Farewell to Music, please click here. 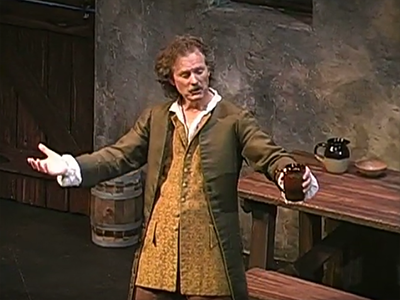 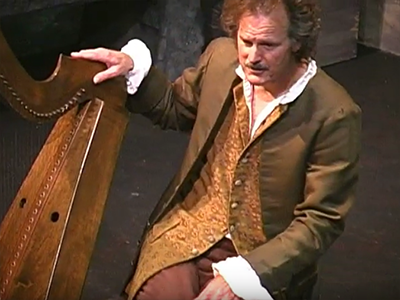 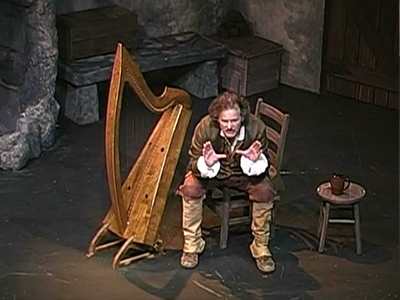 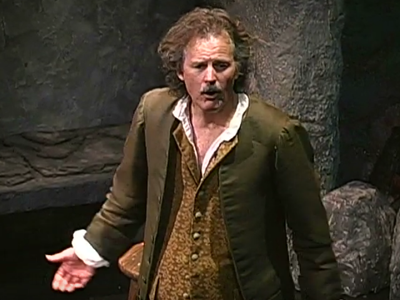 Battle of the Poets
“Carolan’s Cup”

“Hauntingly beautiful ballads and lilting storytelling...it might spring from the 17th century...but the play seems as current as the latest troubles in Belfast ... Patrick Ball's acting is fine, his musicianship outstanding...A small gem.”

—St. Petersburg Times, Florida
An Irish Bard Plucks at Heartstrings
“... whenever performer Patrick Ball pulls his stool up to the harp, streams of silvery tunes glisten and shimmer. It's instant Irish nostalgia, even for a listener who has no particular connection to the country and its culture...Ball plays the pedalless Celtic harp with a deft, florid touch. The melodies are lovingly shaped and the intricate finger work gracefully phrased.”

—San Francisco Chronicle, CA
A Poet’s Fond Stirring Farewell
“Ball is both a master storyteller and one of the world's leading Celtic harpists ... he smoothly melds the two skills into an arresting oral biography of O'Carolan. The music is glowingly distinctive, lingering in the memory after the last note dies. Ball gives MacCabe’s recollections a depth of emotion and a true sense of loss. Together the words and music create a moving portrait of O’Carolan.”

Turlough O’Carolan, known as the last of the Irish bards, was born in County Meath, Ireland, in 1670, the son of a poor farmer. In 1688 he was stricken with smallpox and left totally blind. Through the intercession of a wealthy Irish Catholic family he was given three years of instruction on the harp and subsequently began his life as an itinerant musician. Though never a great hand as a performer, he quickly discovered his genius for composition. For the remainder of his life he traveled throughout Ireland, staying in the houses of the gentry, both Irish and Anglo-Irish alike, and composing for them. Carolan is, to this day, regarded as Ireland’s most beloved and celebrated musician. He died in 1738.

Patrick Ball is one of the premiere Celtic harpers in the world today and one of the very few to perform exclusively on the rare, legendary wire-strung harp — the harp of O’Carolan. The Los Angeles Times describes Patrick as “the leading American practitioner of O’Carolan’s art.” The San Francisco Chronicle calls him “an American master of the Irish instrument … a modern day bard, combining tale telling, history and music into a seamless compound that reaches all ages and types of listeners.”

Peter Glazer is a playwright and director and the creator of Woody Guthrie’s American Song, which has been produced in over 75 theaters around the country, winning rave reviews and numerous awards along the way, including three Bay Area Theater Critic’s Circle Awards for productions at Berkeley Repertory Theater and San Jose Repertory Theater. Peter is a National Endowment for the Arts grant recipient.