The Fine Beauty of the Island 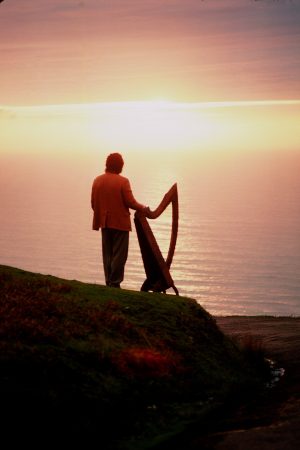 The Blasket Islands lie three miles off the coast of County Kerry in Ireland. For centuries they were a lonely, remote place, a place of fishermen and farmers, of poets, musicians and storytellers. In the early 1950’s, however, the last remaining inhabitants of the islands were forced to leave their homes and settle on the mainland, for their turf was gone, their land poor, and their seas plundered of fish by large trawlers from England and France. The islanders loaded all that they could carry into their curraghs and rowed away—a leave-taking known as “The Vanishing.” But they also carried with them their tales and legends, one of which told of a deeply haunting tune that was heard on the winds of the islands, then passed on through generations of island musicians.

Twenty years after “The Vanishing,” Patrick Ball heard this tune in an Irish bar in San Francisco, and his life was changed forever. In The Fine Beauty of the Island, a new solo musical theater piece, Patrick tells the story of his journey in search of the origin and meaning of this strange, enchanting tune which led him back not only to a Blasket Island community and culture “whose like will not be seen again,” but to a long-neglected corner of his own past.

“There may be one person on the stage, but in The Fine Beauty of the Island...a whole culture appears before us. Through the voice of his Celtic harp, the lilt of his penny whistle, and the brogues of a pubful of characters, contemporary bard Patrick Ball casts a spell ... weaving a pageant out of scraps of stories, researched history, and the raucous dark humor of the Irish. We find ourselves, like children, fed by his stories and abandoned to imagination. By blending a personal inner journey with the sensual reality and harsh beauty of the Blasket Islands, he created, like the bardic wanderers of old, the story of a vanished world.”

—The Voice, Sonoma County, CA
“An entrancing play...mystical and enchanting... bound by heavenly strands of music. It's beautiful”