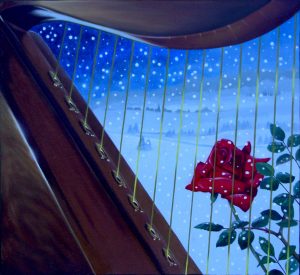 Some years ago I recorded a Christmas / Winter season CD and gave it the name of The Christmas Rose because it includes a very beautiful traditional melody that my mother loved and used to sing in her childhood. This recording was awarded the National Association of Independent Record Distributors Indie Award for Best Seasonal Recording of 1991, became a best seller in its own small way, and prompted many requests for a live concert which would feature the pieces on this recording and a selection of beloved Holiday stories.

So, I stepped into a magical world of English and Irish literature, Celtic legend and traditional folk beliefs and drew out tales such as A Child’s Christmas in Wales, chapters from The Wind in the Willows, and passages from Shakespeare, William Butler Yeats, and Thomas Hardy, and mingled them with beloved pieces of seasonal music. All of the stories and all of the music touch on what is, to my way of thinking, the central message of the Christmas/Winter season: hope. Hope for something wondrous. Hope for a light in the darkness.

I named this show after the recording and performed The Christmas Rose occasionally over the years. Each time I performed it, I was reminded of how much I loved this music and these stories. So, I have finally decided to add it to my regular repertoire of shows and to offer it widely for late November/December engagements. I hope you like it.